I’m giving a free talk at the Shelverdine Goathouse on Monday 17th December at 7pm about Folklore of Christmas.

It being the festive season I thought I would get into the spirit with a folklore blog this week on Christmas superstitions.

It was common to welcome Christmas in with a ritual. In the 19th century it was considered lucky to be the first to open the door of the house saying “Welcome Old Father Christmas”.

There was a common fear of the luck of the house & of the family being lost, affecting the coming year. Many households would not let anything leave the house at all at this time. There was particular prohibition on allowing money or fire leaving the house.

Christmas day was considered to be the luckiest day to be born on. Also, if you were born on Christmas day, you would not be able to see ghosts or spirits.

In former times it was widely believed that at the stroke of midnight on Christmas Eve, as it turned into Christmas Day, the cattle in their stalls knelt down in honour of the occasion, letting out a groan as they did so. This phenomena was first mentioned in print in 1849 in John Brand’s “Observations on the popular antiquities of Great Britain”, & was well known in the 19th & early 20th centuries.

People’s faith in date related beliefs were severely tested in 1752 upon the introduction of the Gregorian calendar in England. The Gregorian calendar was a refinement of the Julian calendar, amounting to a tiny correction in the length of the year of about a five hundredth of a percent. It was adopted in Roman Catholic countries in the 16th century & in England a couple of centuries later. In 1752, to align the calendar with that of the continent & Scotland, the calendar was advanced by 11 days: Wednesday 2nd September 1752 was followed by Thursday 14th September 1752. Folk wondered if nature would follow the new rules or the old.
As reported in Bentley’s Magazine in 1847: “it is said that when the new style came in, the younger cattle only knelt on December 25th while the older cattle preserved their genuflections for Old Christmas Day, January 6th”

Many churches ring the bell at midnight on Christmas Eve. At All Saints in Dewsbury, Yorkshire, they go for it. They “toll the Devil’s Knell”; bell ringers gather at 10pm & toll the bell, one stroke for every year since the birth of Jesus. They coordinate the strokes so the last toll is timed to end exactly at midnight. The explanation is that the bell used for the toll was donated by a local landowner as penance for killing a servant. The bell is called “Black Tom” after the landowner. Another explanation is that the Devil died when Christ was born & it is appropriate to mark his death by tolling the bell. 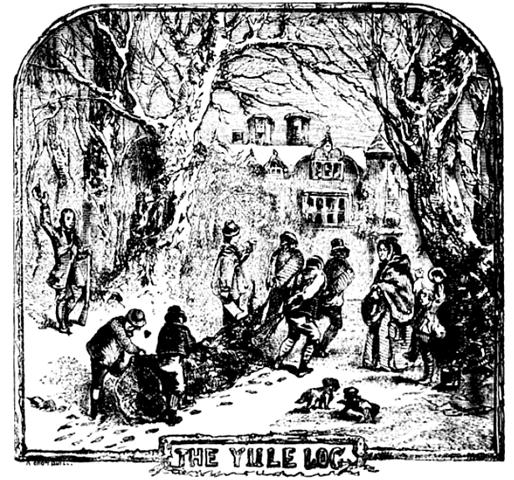 The idea that a large log should be burning in the fireplace on Christmas Eve goes back at least 300 years. It is kindled with a piece of log saved from the previous year’s Yule Log, & a bit would be saved for the next year. Saving a bit of the Yule Log ensured the luck of the house would continue from year to year, & it would offer protection from witchcraft. It was widely believed that the log had to burn the whole way through Christmas Eve.

There was a strong tradition of candles in the home at Christmas. The “Yule Candle” was much larger than the normal candle, about 18 inches long, often presented as a gift to regular customers by grocers & other trades folk. Sometimes the candles were coloured, or decorated with evergreens & put in a place of respect.

Some of the Yule Log superstitions were also appropriated for the candle, especially the keeping of a piece of candle for the following year for luck. It was unlucky to move the candle when lit, to snuff it out, or if it did not light easily. In the 1890s folklorist Sidney Oldall Addy reported that in Sheffield: “A candle or lamp should be left burning all night on Christmas Eve. Unless this is done there will be a death in the house”. The first description of a Yule Candle is in 1817. This custom is mostly local to Yorkshire.

Mistletoe was part of Christmas greenery since at least the 16th Century. Kissing under the Mistletoe was first reported in 1813 in John Brand’s “Observations on the popular antiquities of Great Britain”.
Most people say kissing is for luck.
It was believed that any girl who had not kissed would not marry in the following year. A girl could dream of her future husband by putting some of the mistletoe under her pillow at night.
Some believed if the Mistletoe was not burned when the decorations were disposed of, “all couples who have kissed beneath it will be foes before the end of the year”.
Mistletoe is supposed to afford protection from Lightning.