The second song from the upcoming Cunning Folk album: Ritual Land, Uncommon Ground is called The Old Straight Track. Here is a blog about what inspired it.

I grew up in East Dorset close to Cranborne Chase, a large area of countryside the Norman kings kept clear of habitation to make room for hunting ground. There is plenty of evidence of our ancestors left in the local landscape.

There is Badbury Rings, an iron age hill fort reputed in local legend to be the final resting place of King Arthur.

Knowlton Church, a Norman ruin within a henge complex.
There is Bokerley Dyke, a Saxon defensive ditch running for miles through the countryside & there are countless round barrow tumuli in the corn & barley fields. You can literally see where our ancestors made their mark. I grew up trying to see if there are connections between places, significances.

A Herefordshire man by the name of Alfred Watkins was a pioneer of trying to make connections between old places on the landscape. He thought the locations of ancient monuments & settlements were very significant. He thought that they were aligned.

He wrote a book in 1925 called “The Old Straight Track” on the subject. He called these alignments, “Ley Lines”.

Alfred Watkins’ ideas are controversial & influential. They are not taken seriously by orthodox archaeologists but have inspired ley hunters & artists. 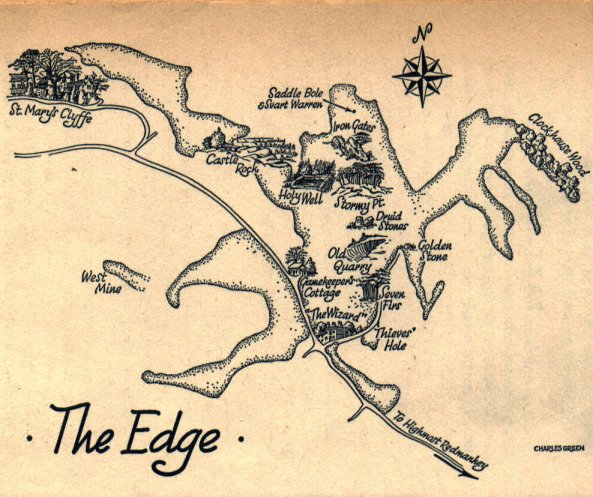 The writer Alan Garner in his book  “The Moon Of Gomrath” portrays the Old Straight Track appearing at moonrise near Alderley Edge.

I am fascinated by the concept of the ley line; the connection between old places over distance & time. The idea of old, wild magic transmitted through the land between standing stones & hills, along ancient tracks from forgotten settlements to barrows & cursi. Maybe we cross these lines every day.