Seeing as I have an album coming out this year I thought I would do a series of blogs about the process of making albums.

So I have been making albums professionally since 1997 &, as the years have tumbled over each other like so many autumn leaves, I’ve learnt a lot about the making & recording music.

The album itself is a throwback to music as an owned commodity. There used to be a time when people would habitually buy music on vinyl, tape or CD to listen to at home. In fact the 20th century music industry was initially driven by the phonograph makers’ need to have things to play on the players they were selling! Nowadays many folk listen to music on Spotify & other such clouds & the physical objects of CDs, Vinyl records & tapes are the preserve of more specialist lovers of musical objects.

I like ‘owning’ the music I listen to, perhaps this makes me feel like more of a patron of the artists I love. It’s a subtly different way of relating to music to listening on a cloud or on the radio; not better, just different.

I like the change in relationship with music that the internet & it’s clouds has brought. I enjoy playlists & compilations, however I love listening to albums. Albums are long-form collections of songs to listen to. In order. From start to finish.

This is an album you ought to listen to from start to finish. Bowie was both a singles artist & an album artist. I bought Low on vinyl from a second hand shop in Balham in 1995 & for years thought side B was side A. (I spent a lot of the 90s heavily intoxicated)

Anyway, the act of recording music can be deeply rewarding. It can almost be an end in itself. I habitually record music & write songs & it’s part of what I am. If you want to make music then that’s as good a place as any to start. 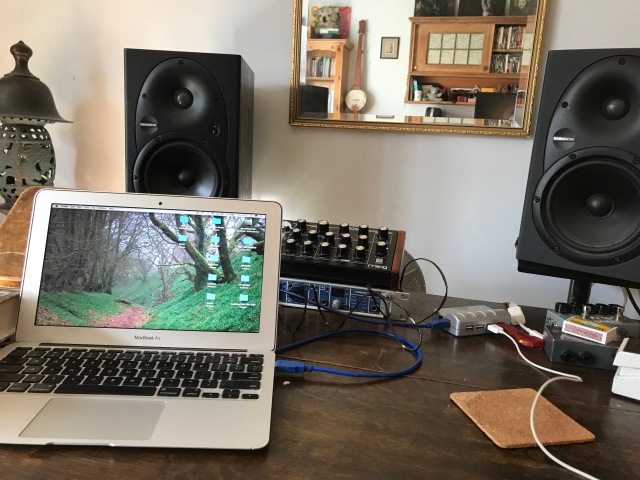 What you can see here is my recording set up. The cheapest MacBook Air you can get. This has the recording software on it. It’s the ‘tape-recorder’. It does not have to be expensive. Behind the computer is the in-out box, the blue box. This converts audio signal to digital signal. This cost me £700 12 years ago. When I need to replace it I expect to spend £1200. The signal convertor is one of the bits of the recording chain you shouldn’t scrimp on. I record at 96k. It sounds better.

The speakers are good too. When you are recording music you need to accurately hear what you are making. I’m not a mix engineer so the speakers are mid-level. My ears simply don’t hear in the way that sound engineers’ ears do. I hear compass, dynamic, vibe, tempo, emotion, magic. I hear delay & reverb. 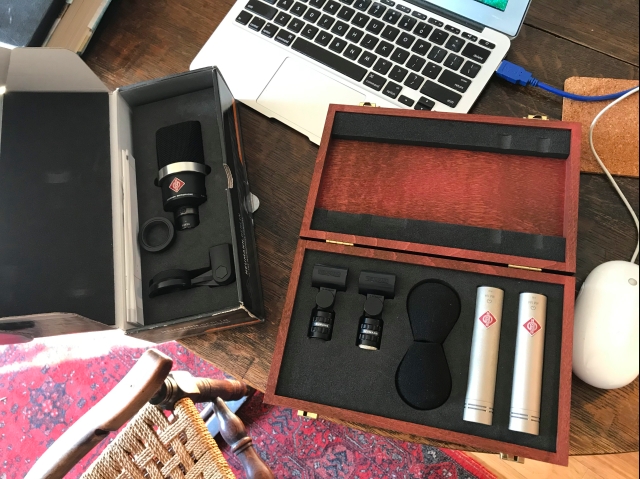 These are my main microphones. I need a good one for vocals & a good pair for acoustic instruments.

I’m a guitarist. This is my quiver of guitars. I keep them in their cases; they are happier in their safety until they are let out to play. They are my brushes.

I used these two a lot on my upcoming album. The acoustic is a Gibson J200 I bought from a builder in Canvey Island who was scared of how good it was. It is good, actually.

The bass is a 1973 Precision Bass. It’s the same age as I am & about as beaten up. The tone is deadly, especially when picked. I spent the summer of 1990 working at ‘Pizza Perfection’ in Wimborne, Dorset to save up the £350 it cost to buy it. Best purchase of my life. I was a bass player before I became a guitarist & I’m still a bass player in my heart.

My recording studio for the new album was my living room. I had to switch off the washing machine, radiators, oven & extractor fans before doing vocal & acoustic guitar takes & only record when my family was out of the house & the flight path wasn’t on the day when it was over my house.