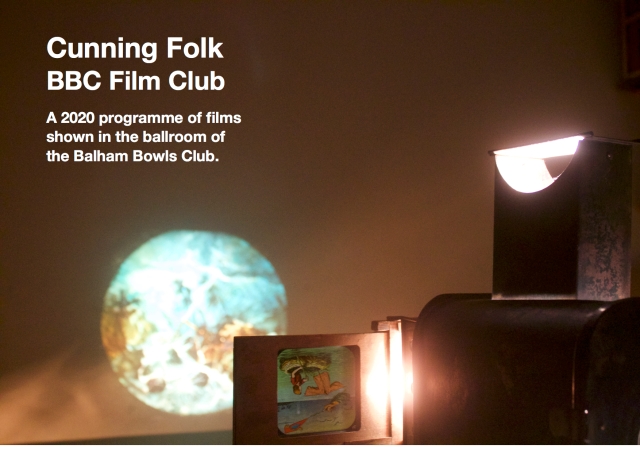 For ten years or so I have been running a monthly folklore society, the South East London Folklore Society, hosting talks on all manner of magical, folkloric & cryptic subjects. It’s really enriching to put on interesting events, & has provided much inspiration for my artistic practice. In order to run these meetings I have a projector & laptop. At home I use the projector to screen films. The experience of watching film does not wear thin.

I have a few friends, Paul, Simon & Martha, who pop over once a month for a screening. We tend to watch experimental or arthouse films. One of the films we watched last year was ‘Requiem for a Village’, which Simon suggested.

It’s a fascinating piece & when  Balham Bowls Club approached me to organise some events I decided I wanted to share the film experiences I have enjoyed. So the Cunning Folk Film Club begins. The 2020 season will be a series of monthly screenings on the first Thursday of each month in the ballroom of the Balham Bowls Club at 8pm. The 2020 season will be films about the British relationship with the the countryside. I am in the process of licensing films & archive TV shows from the BFI & the BFI TV archive. It’s really good fun choosing the films. I hope to announce the full program in the next month or so.

Last Halloween myself & my associates performed a live soundtrack to the Swedish silent classic, Haxan. I am in the process of putting together a few live soundtracks into the film club program.

The cinema experience can be magical. If you want to come to the Cunning Folk Film Club it’s on the first Thursday of the month in the ballroom of the Balham Bowls Club. Doors are 7.30 & screening is at 8pm. Food can be ordered, drinks can be drunk, quiet words can be spoken. The screenings are informal & relaxed but I will be enforcing a ‘no phone conversation’ rule & making sure we are considerate of each other.